Today on the blog we're excited to share some artwork from our early days as developing illustrators. We hope you enjoy them!


Kimberly Gee:
A few years ago, I took Children’s Book Illustration at Art Center, in Pasadena. The class is taught by award-winning illustrator and author, Marla Frazee. A quick aside...I highly recommend this class. It is offered through the Art Center at Night program, so it is available to the public. One of the assignments was to design and illustrate a picture book cover. At the time my kids were about 2 and a half - I was spending a lot of time with them - so they were my inspiration for the project. I created the cover below.

The critique went well and several of my classmates asked about the story that went with the cover. I didn’t have one! It wasn’t a part of the assignment :-) ... One of my kids’ favorite phrases at the time was “Today is a good day”....usually followed by ...”for a popsicle”, or “to go to the park”. That was all the story I had, but my classmates encouraged me to write a story for the cover. I did. I submitted it to Diane Muldrow, Editor at Golden Books/Random House, who plucked it out of her slush pile and published it! Hooray! 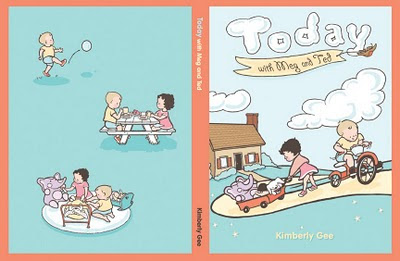 Eliza Wheeler:
In college, I took a screen-printing class where we were given the assignment to create a print that used the title 'Seen by a _____ (fill in the blank)' . My school didn't have a concentration in illustration, so most of the students there either majored in graphic design or studio art, neither of which much considered illustration as an art form. I came up with the title, 'Seen by a Child', and created this illustration. In an awkward moment presenting it at our critique, my professor said with frustration and anger, 'Why did you print that?'. I thought he was angry that it wasn’t conceptual enough, or maybe that I had gotten the assignment wrong. At my confusion, he repeated the question. It turned out he thought I had printed the artwork of another artist. When I clarified that I drew the image, he exclaimed "Oh! You should illustrate for children!" In that moment, hearing someone I respected state this with such clarity and objectivity, it made me realize, "I really should." Although this illustration no longer fits in with the rest of the portfolio I’ve built since then, it's still one of my favorites. 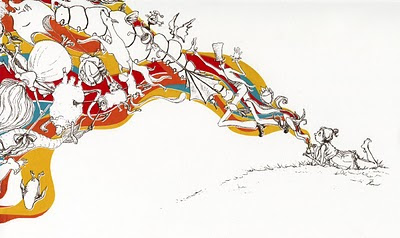 Debbie Ridpath Ohi:
If I had to choose an illustration that helped get me started in my illustration career, it would have to be from my childhood. My sister, brother and I used to put together a weekly newsletter for the family. As the oldest, I was the editor (of course). All three of us would contribute cartoons and text, though my brother mainly drew rocket ships.

Hm. I'm a little horrified at how little my style has changed since I was 16 years old! But then again, those early illustrations really helped me appreciate how FUN drawing could be.

p.s. Note re: sample drawing: Trudi was the family pet, a small Australian Terrier who sometimes forgot her housebreaking training when she got really excited. 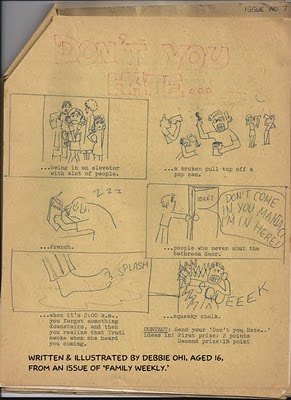 Andrea Offermann:
I had just finished my illustration degree at Art Center. At that point my illustration style was very much all over the place. During the later terms I had gotten into printmaking, especially etching, and finished my last term with a grad show of large etchings, more suited for gallery than for illustration.

A while later I was asked to contribute a piece for a gallery show, and I decided to emulate the fine etching lines I loved so much using fine drawing pens, and to combine them with an oil glazing technique I had learned earlier at school. The result ended up defining the illustration style I am working in now, and the story I had begun to spin when working on this piece led me to write and draw a graphic novel short story which was printed in Flight Volume 4. 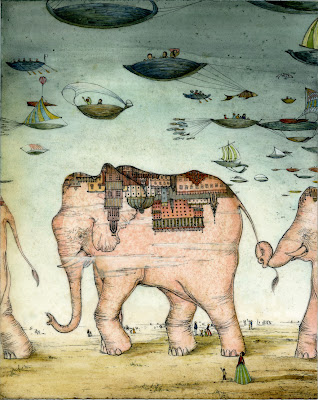 John Deininger:
During junior-year in college I was a bit lost and uninspired; when by chance inspiration struck via a Step-by-Step article on the works of Golden Age illustrators: NC Wyeth, Maxfield Parrish, Lyendecker, Howard Pyle, etc. I couldn't believe my eyes! Why wasn’t this being taught in illustration school!? So after a bit of research (long before Google or You-Tube) I began to study and teach myself the old-school way of building an image: tangents and overlap, directing the viewer’s eye, multiple figures, setting the scene, reference, color theory, value theory, character design, action design, environment design, hard and soft edges, variated line, variated shape, negative space, etc.

Well anyhow, that junior-year journey gave me some new skills to apply to the world of children's picture books. First up was a favorite character from childhood: Paddington Bear! It was painted with sequential layers of watercolor, then gouache, then oils. While it was never 100% finished, the result was such a leap that the rest of my time in college was spent developing this way of working, and applying it to some loose story concepts. 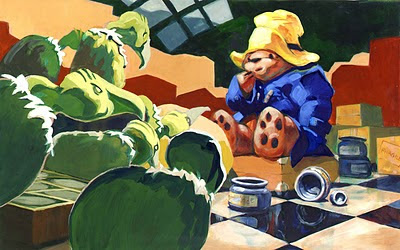