I am not an activist.

The thought of getting on a metaphorical (or literal) soapbox and shouting out to the world everything I think is wrong with it makes me shudder. Makes my hands go clammy and my knees go weak. The thought of asking strangers to sign petitions or publicly debating hard questions whose answers almost always fall within shades of gray makes me want to gag. I’ve vehemently argued with friends in the past that my artistic social media face should be neutral and accepting and about fun and lighthearted things because children should have fun and lighthearted lives.

The world is going through seismic shifts at the moment. We seem to be falling back to patterns of nationalism and isolation when we are more easily connected with each other now than we ever have been in our history. We are more polarized and even the innocuous topics are politicized.

Remaining silent is the same as condoning what is going on in this moment. Whoever you are, whatever your stance is. Yes, I’m even writing directly to those who oppose my beliefs, because you do have a right to state publicly how you feel. I am not asking you to agree with me.

I don’t know about you, but I’ve found it harder and harder to remain silent on issues that matter to me. When people in my life are directly and emotionally impacted by decisions that seem like we are regressing on our years of painstaking progress and the hard-won freedoms for ALL people, regardless of who you are or where you come from, to live and practice and enjoy life. But I still don’t like “it.” I’m still not comfortable with “it.” You know what “it” is. Activism.

So I think we should redefine what activism is.

There is bold, public activism: marches, protests, sit-ins, op-ed pieces, petitions and signatures, letters to your local and national elected leaders. I might do some of it, some of the time, but, frankly, even writing that makes it sound exhausting. Is there more? Voting. If you do nothing else at all activism-related, please vote. There’s my soapbox. But I still think there’s more activism out there. The subtle activism. The activism of introverts.

What is it? What does it look like? What are you expected to do? It looks like…anything. It looks like telling the story you want to tell that you don’t see on the shelves. It looks like bringing your authentic self to the table, to the written word, to the drawn line on the page. It looks like writing the stories or drawing the pictures that might one day label your book “BANNED.” It looks like creation. It looks like what we are already doing. What we will continue doing through the hard, contentious times. When it hurts, when you want to cry and curl up and ignore the world around you (and maybe taking a break from the world for a time is good, too). It looks like trying to just reach one person in the world, make a difference in some small way, instead of trying to enact sweeping changes.

Recently, a friend shared a story about a zebra. They have stripes for camouflage, they may look like an awkward horse---but the shadow they cast is a long one and when you change your perspective and see it from afar, their shadow looks like a black stallion. Your small act of activism might cast a longer shadow than you think.

My subtle activism started out for myself. I needed to process my own emotions when confronted with a shift in my status quo. It was easier to write about something less personal, so "I" became “You” and "everyone else" became “The World.” Like any good story or character, it evolved, took on a life of its own and met me exactly where I needed it to be when I needed it the most in my life. If my work touches even one person and makes their life a bit better, then my goal is accomplished. My voice is loud enough. 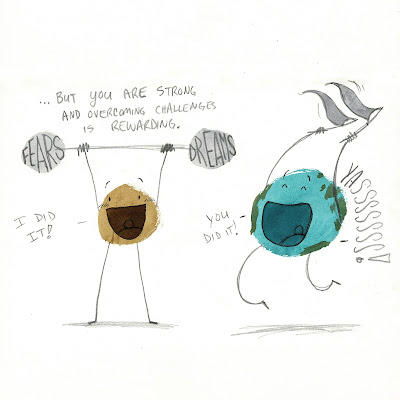 The world needs your voice. Your voice is loud enough. Go create.

_______
Gail Buschman is a graphic designer and children's book creator who loves to travel and explore new places.