Understanding Culture through Film and Literature: A Focus on Russian Animated Films

“Everything good is done slowly...the first thing you need to know is how to express yourself, you have to know how to narrate.” Fyodor Khitruk 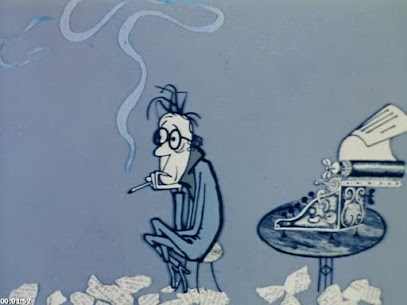 
Under the Soviet Union animation was to be standard, monitored, and only for children. Artists, writers, and cinematographers were censored. Making films for children however, gave them a certain liberty. Many artists worked for the state-funded animation studio Soyuzmultfilm. They used subtleties to critique their society during times in which they were expected to praise it.

Though, it wasn't all political. They told stories which neither satisfied nor contradicted society or the scrutinous censorship imposed on them. They made films that animator Garri Bardin says “talked about eternal things. Morals, virtue, kindness, faith in something good...in man himself.” Their work retained Toska: A certain melancholy of the soul that writer Vladimir Nabokov described here:

“No single word in English renders all the shades of toska. At its deepest and most painful, it is a sensation of great spiritual anguish, often without any specific cause. At less morbid levels, it is a dull ache of the soul, a longing with nothing to long for, a sick pining, a vague restlessness, mental throes, yearning."

Through these films we even see reinterpretations of something so familiar to us as Americans, the Russian rendition of Winnie the Pooh, who is erratic and clumsy and full of energy, in a sort of constant frenzy. Or Thumbelina, drawn in another sense, with different shapes, colors, sensibilities and movement. 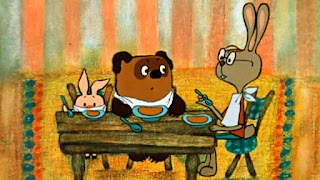 In Yuri Norstein's Tale of Tales, it attempts to structure itself like a human memory. It neither follows a conventional narrative nor a chronological order. The primary theme of the film is war and its catastrophic losses. There is a scene where loved ones disappear while the music glitches and couples dance during the Tango of the Tired Sun. A dialectic exists within these films, where you can sense sadness in a happy scene, and be left with a smile in a sad one. 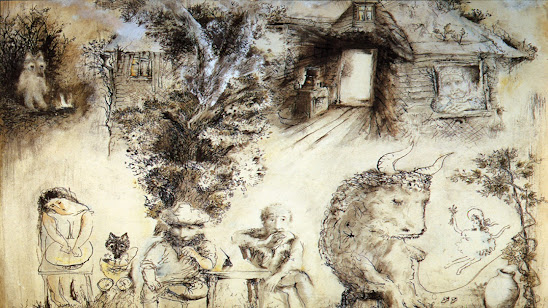 Tale of Tales by Yuri Norstein

To explain this “Pushkin Origin” which is a part of all of his work, Norstein reads this poem:

And both you and I

but could abruptly die

but there is freedom, peace.

And long have I daydreamed the life of peace 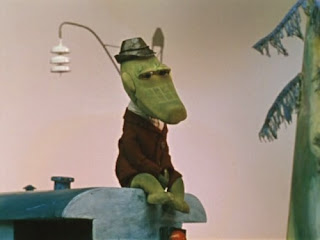 
And we can see this applied to the emblematic Russian character Cheburashka animated in stop motion by Roman Kachanov. In a scene where he is praised for not abandoning his friend Gena the Krokodil, he sits and listens to him sing and play the accordion:

Slowly minutes are floating away

Don't expect to see them again

And maybe we feel sad that our past is gone

All the best is ahead of us

Everyone should believe and hope for the best

And our blue train is steaming ahead

Maybe we have hurt someone unintentionally

Calendar will turn that page for us

And the rainwater gurgle

As it streams underneath their feet

why this day full of thunder

makes me look so jolly upbeat

If you are interested in watching Russian animations from the last century, a comprehensive list can be found in the documentary Magia Russica directed by Masha and Yonathan Zur.

Zahra Marwan is a writer / illustrator of two upcoming books. Where Butterflies Fill the Sky about leaving home, and The Sunflowers about Vincent Van Gogh's anticipation, friendship and love of color. She grew up in both Kuwait and New Mexico and currently lives in Albuquerque with the sweetest Frenchman in the world and their cat who has a really bad attitude. You can see her work here: