It Is Normal to Not Be Productive During a Global Crisis

I’m writing this blog post from San Francisco, on day 4 of “shelter in place” which means most everything (schools, all workplaces, stores, gyms, bars, the library) is closed and everyone has to stay inside.

Last week at this point everything was changing at an alarming pace. It was unclear if schools would close, I was wondering if I could still responsibly go to a pilates class (I didn’t because I was anxious and lazy), and after every store had run out of toilet paper I unpacked my travel bidet from my camping gear. On top of this I was fretting about the democratic primary results and trying to meet a deadline for a book I’m working on. Then I got the message that the entire city was essentially closing down for an indeterminate amount of time.

I feel afraid, out of control, and bored, which are feelings that are really interesting and challenging to have at the same time. I’m also feeling unproductive. A lot of people in the kidlit community are rolling up their sleeves and doing livestreamed storytimes. So this is great if it's within your comfort zone to record yourself live (I’m going to do some too) and we also need more in other languages like Spanish and Cantonese, and for deaf kids, as Alia Jones wrote on Twitter in conversation with Sujei Lugo and Ann Clare Le Zotte. Even still, the response from the kidlit community re: what can we do? has felt anxious and frantic, which makes sense, because that's the state of our communities now. I’ve even read some particularly tedious and annoying posts over the past couple of days where people humble brag about how much more productive they’re being (they’re even exercising!). Sure, I get it, being an illustrator means you’re already socially isolated, but when we look up from our drafting tables now, everything has changed. We’re making content, but are we just scribbling while Rome burns?

My husband who’s a PhD student has been receiving health alerts from his university. He pointed out a very small part at the bottom of one he received a few days ago (italics are mine):


Finally, for all community members, we realize that there are significant implications of these restrictions for your academic and research progress. Please know that it is entirely reasonable that progress would slow during times of unprecedented global crisis such as this.

In other words, Stanford was telling its students that it’s completely natural and normal to not be as productive as usual during a pandemic. This message isn’t just for PhDs; it resonated with me because as an author-illustrator I’m a freelancer and I’m expected to be productive in a way that’s publicly shareable. So I was given permission to not feel bad about my lack of productivity. For some of you this may be obvious; for me it wasn’t. We’re at the start of a global pandemic and might be quarantined to our homes for months. It’s noble to put out a livestream. But it’s ok to not.

It also reminded me to not equate my self-worth with my productive output, which is a really hard thing to do in our culture and economic system. As a freelancer the only person setting limits on what I get done in a day is me. It’s easy to feel like I’m wasting precious time if I’m not constantly hustling, whether that be getting book deals, doing book promotion, impromptu teaching gigs, or flying for an entire day to give a 45-minute talk. I could fall asleep on my bed every night surrounded by book dummies and picture books and still feel like I wasn’t getting enough done. There’s little continuity to this job, and it’s often isolating and competitive.

It’s tempting to beat yourself up over some made-up metric of productivity. We don't tend to work a typical 9-5 in an office, so it's hard to know what a typical work day looks like, and it's different for everyone. In a recorded lecture that's part of the James Marshall papers at UCONN Marshall says, "My friend Arnold Lobel gets up at 9:00 am every morning and works from 9-5, and has done this for 20 years. His wife Anita Lobel (his ex-wife) refers to him as that little shopkeeper. I thought oh Arnold’s done such beautiful work, I will try this approach myself. And I thought I was going to have a stroke, nothing would happen. I work, work and nothing would happen." You have to figure out a schedule that works for you. But I do think there's a touch of imposter syndrome that occurs when you think that your method of doing it is unconventional, or not adhering to the myth of hard work being long, agonizing hours.

Marshall continued, "I work in basically creative periods of about 3 weeks that’s all I can stand…This is dangerous because when I tell librarians how short it takes me to do a book, I can see in their eyes my stock going down. You have to tell them you worked five years on this book and you’ve drawn with the blood of your slaughtered children and then it’s a masterpiece."

We live in a culture and economy where it's reasonable for freelancers to work 24/7. The consequence is that it can feel like every second that goes by is a second that is potentially wasted. Is that day off from working or from engaging in social media the day that will cost you that dream book deal? I, for one, would like to get off this ride.

In January I was lucky to do a week-long school visit at the American International School in Chennai, India, and I met with high school juniors and seniors to talk about my career path as an artist and a writer. I didn’t mince words; I basically said if you’re not independently wealthy or you don’t connect yourself financially to someone who is, you should be prepared to get a day job. And know that you’ll end up working on projects that you’re not totally passionate about to make ends meet. I gave them ✨practical advice✨. One student asked: do you feel bad when you work on a project you’re not passionate about? Why would that be worth your time at all? I’m sure I pulled myself together and backpedaled, but their question stuck with me. Of course I want to be passionate about everything I make. I don’t want to be scared by the possibility of jobs drying up. I don’t want to become cynical. I want to remind myself that my job is fun (because it is). But I don’t want to have to prove and perform my worth all the time in a public way.

As I enter a second week of who knows how many more weeks of shelter-in-place I’d like to be kinder to myself and be less of an awful boss to myself. I want to open up more space for silliness and humor, and I want to be able to say that I’m scared. I want to be okay with letting my progress slow a bit. Everything in publishing seems to be slowing down too, do you really think anyone’s working? And finally, it’s fine if you don’t do that livestream. 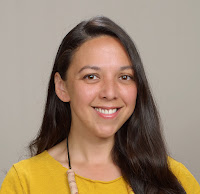 K-Fai Steele (she/her) is an author-illustrator who grew up in a house built in the 1700s with a printing press her father bought from a magician. She wrote and illustrated A Normal Pig, and illustrated Noodlephant by Jacob Kramer, a Kirkus Best of 2019 picture book. She also illustrated the forthcoming Probably a Unicorn by Jory John. K-Fai was a Brown Handler Writer in Residence at the San Francisco Public Library, a James Marshall Fellow at the University of Connecticut, and an Ezra Jack Keats/Kerlan Memorial Fellow at the University of Minnesota. She lives in San Francisco. Follow her on instagram @areyouokfai.
Posted by K-Fai Steele at 7:30 AM