Kidlit Loves All Kids: The Need to Create Books for Children With Mental Illnesses. 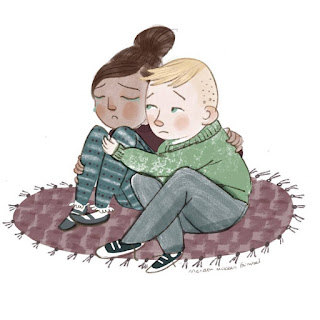 I want to talk about a something that is dear to my heart, that is unfortunately a topic that I think many of us would prefer to avoid: mental illness. Even typing those words I can feel the heavy stigma associated with it, but in this blog post, I want to share my own personal experiences and hopefully we can all get a better perspective on how our craft, as children's book writers and illustrators, can better help the mental health of our child readers.

When I was little, I often had stomach aches during day and nightmares at night. Many kids have those sorts of issues, but for me, they were manifestations of undiagnosed post-traumatic stress disorder, or PTSD. Most people associate PTSD with those who have served in the military, but PTSD can occur among anyone who suffers from a traumatic event, and often goes undiagnosed among survivors of child abuse. For me, certain smells, sounds, and phrases could make me freeze up into a little ball as they reminded me of events I had lived through. I was a friendly kid at school, but on the inside I felt very alone and hopeless. And I didn't feel safe enough to reach out to the adults in my life. More than 20 years later I was diagnosed with PTSD, and although these events still affect me, with my family's support and with the help of my therapists, I've learned to cope with my trauma.

As a kid, before I had this network of great people,  I found my strength and comfort in books. I felt like books understood me when others didn't. They empowered me, and helped me bear the unbearable. I wrote a blog post about my gratitude for them last year, but, in light of recent events in the news, I've been thinking about other children out there with similar experiences. Do they have books that speak to them? Do they see themselves in the books they read?


According to the National institute of Mental Health, 1 in 5 children, at some point during their lives, will have a mental health crisis. That's a little over 20%. That would be at least 5 children in your average American classroom. To me, that is a shockingly high statistic. In addition to that, every year, about 43.6 million American adults (or 18% of the total adult population in the United States) suffer from some type of mental illness, to include enduring conditions such as depression, bipolar disorder, or schizophrenia.


There are more people with mental illnesses than you might realize. It likely affects some of the children you know, and some of their parents too. Why then are there so few characters in children's  picture books through middle grade books, that have mental illnesses or children that come from broken homes? And why is there such a hesitation to include darker themes?

Matt de la Peña wrote an article, Why We Shouldn’t Shield Children From Darkness, that I deeply appreciated. In it he said:

"A few weeks ago, illustrator Loren Long and I learned that a major gatekeeper would not support our forthcoming picture book, Love, an exploration of love in a child’s life, unless we “softened” a certain illustration. In the scene, a despondent young boy hides beneath a piano with his dog, while his parents argue across the living room. There is an empty Old Fashioned glass resting on top of the piano. The feedback our publisher received was that the moment was a little too heavy for children. And it might make parents uncomfortable. This discouraging news led me to really examine, maybe for the first time in my career, the purpose of my picture book manuscripts. What was I trying to accomplish with these stories? What thoughts and feelings did I hope to evoke in children?

...Loren and I ultimately fought to keep the “heavy” illustration. Aside from being an essential story beat, there’s also the issue of representation. In the book world, we often talk about the power of racial inclusion — and in this respect we’re beginning to see a real shift in the field — but many other facets of diversity remain in the shadows. For instance, an uncomfortable number of children out there right now are crouched beneath a metaphorical piano. There’s a power to seeing this largely unspoken part of our interior lives represented, too. And for those who’ve yet to experience that kind of sadness, I can’t think of a safer place to explore complex emotions for the first time than inside the pages of a book, while sitting in the lap of a loved one."

This idea really resonated with me. While YA has done an admirable job on this front, we haven't made similar strides in picture books to middle grade. I recognize the absolute value of the #weneeddiversebooks movement, and the steps it has taken to diversify our idea of protagonists, but our definition of diversity needs to be inclusive of those whose lives are touched by mental illness.

There is still a stigma attached to mental illnesses, and it seems like it is inappropriate to talk about these conditions, like it's airing dirty laundry. But this secrecy and silence reinforces all these negative stereotypes. Childhood can be hard enough with a mental illness, but we need to make sure that we write more books that don't make it harder for our readers.

Books were a saving grace in my troubled childhood. It's my hope that as advocates for children, we reach out to all children with our stories. All children need to feel seen and understood. #KidlitLovesAllKids 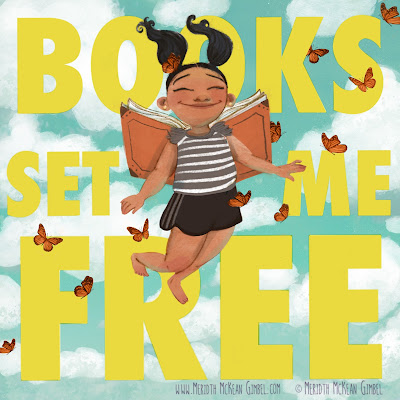 Some books that feature mental illness: 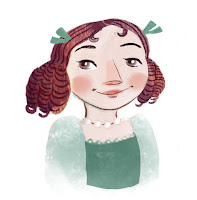 Meridth McKean Gimbel is a freelance writer and illustrator who loves anything art related, story infused, and chocolate covered. When not working on her illustrations or writing stories, she is busy building a time machine so she can hang out with her pirate buddies and find buried treasure.

Meridth is represented by Linda Pratt at Wernick & Pratt. You can follow her work at:

Posted by Meridth McKean Gimbel at 4:26 AM