"An Artist is an Explorer"

I have this simple post-it-note, scrawled in my husband's hand, pinned to my studio door. It's the first thing I see when I level my eyes and cross the threshold from me - to artist me. 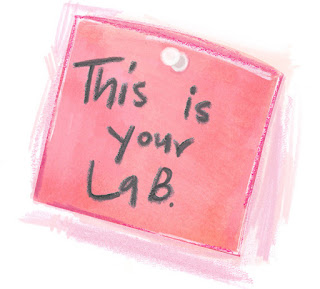 For most of my life, I've identified solely as "artist me." Yes, I was a daughter and a sister, I was a friend. I was a Mexican Hawaii-girl, a swimmer, and a dog-person; but mainly I was an artist. I made this distinction at about five-years-old and held onto it for dear life. I held onto it all through high school and college and well into my non-stop career as a corporate career-girl. When I left New York City four years ago, I was working sixty-to-eighty hours a week as a deadline-oriented video game designer. In my head, I was still an artist, but in my heart, I wasn't so sure.


My husband works as a chef. He walks the line between talent and hard work with grace and style. In the middle of my identity crisis, I came home one night to find him boiling a cucumber. I'm no kitchen wizard, but even I know - one simply does not boil cucumbers. I pointed out this obvious truth. "Really, Amber? Do you know what happens to a cucumber when it boils?" I admitted that I did not, to which Matt responded, "Yeah, me neither - but I'm about to."

When I arrived at the studio the next morning, I was armed with the aforementioned post-it and a gauntlet. My art has grown in quality and joy exponentially ever since.

Here's what we discussed that evening and the things I have learned as a result. I hope they bring you clarity and excitement the way they have me.

1. Put on your lab coat, kid.
I literally put on a white trench at least a few hours a week. When I am wearing it, I suspend disbelief. I am not an artist, I am a scientist. The issue with coming to children's books from a traditional art background is that you arrive keenly aware that there are right ways and wrong ways to make art - but what if there weren't?

In a lab, there is only cleanliness, hypothesis, trial, error, focus and the raw thrill of discovery. Create an environment where these six elements can thrive. Now dive!

2. Learn by doing.
Scientists know that the best way to learn everything is through experiments. Classes, books, and even conferences are fantastic - but only as long as they serve the work. A professional doesn’t worry about knowing every technique under the Sun. If all process and cure had already been found, science would die. The excitement of uncovering unknown is born through action. Theories are where you start. The rule in my lab is that if I have an idea on a Monday, I had better be testing on Tuesday. 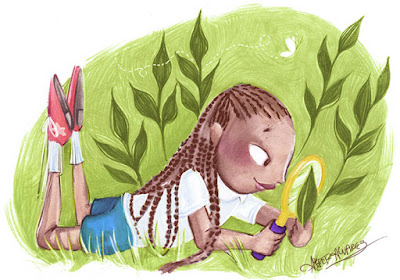 In 2016 my brother & sister-in-law gifted me a hundred dollar box of Prismacolors. It was all I could do to suppress a cringe. A decade ago, fresh out of college, I spent a year and a half, or 32 episodes, designing the Pre-K T.V. extravaganza - PINKY DINKY DOO. My numero uno design tool? Prismas.  Just holding that deluxe box gave me flashbacks. I had hated those colored pencils with my whole heart. I decided to exchange the Prismas for what I knew belonged in my studio, Winsor Newton watercolor paints. As luck would have it, while distractedly sorting through a pile of mail, I accidentally unwrapped the factory plastic on the box. It took me six months to finally use them. The rest is history. I now use colored pencils - of all kinds, every single day. They're an essential part of my toolkit, and I NEVER would have picked them up on my own.

After the Prisma Incident, I made a commitment to buy one tiny untested-by-me-recently thing every time I went to an art store. This habit costs less than ten dollars a month. Some purchases are total duds, but others are kidlit magic. Before I became a scientist, I created with Windsor Newton watercolors, Arches 300lb cold press, and Adobe Photoshop. I now use water-soluble graphite, Copic markers, General's Chalk pencils, Gamsol, Uni-ball Signo gel pens, Brusho element pigment, vinegar, acrylic paint and calligraphy Ink of all brands on the regular. As a scientist, I know that the viscosity and staining power of each brand of calligraphy ink varies drastically. I use different brands of colored pencils at various stages of my work. I use Photoshop in a quick and precise way - and I do not lean on it. I've learned that for me, traditional methods are more fun - something I'd never have known if it weren't for my lab.

4. Be clear about your intentions.
Scientists often pivot at some point in their research, the thing they hoped would cure x instead prevents y. They hold both nature and control in their hand. So do you. Through your experiments, you will most likely stumble on fantastic byproducts of your research. Without a focal point, you'll wander too far from x or y.

This year I'm using my lab to:
1. Speed up my process.
2. Incorporate more of my sketches into my final art in a way that feels finished but open.

If you wander aimlessly through your proverbial petri dish, you're gonna lose dat funding.

5. Take control of one constant.
The marks below are all made with the same tool - a Vermillion General's Pastel Pencil, on six kinds of paper.

Assumption is the death of science. If something is not working in the environment you've created, change things up before you throw in the towel. Follow your intuition. Hunt surprise.

6. Punch in and Punch Out.
Discovery takes time. Ideas need space to grow into maturity. So do you. At the height of my creative frustration, I had transferred the sixty plus hours I worked in the corporate art world directly into my studio. I expected the same furious pace to result in a similar amount of measurable forward motion. When I was disappointed with my results, I worked harder and longer. Overworking yourself in a tornado of misguided "productivity" blinds you to the delicate unfolding of the unexpected. It blocks your intuition. Shockingly enough, I now know that I make more and better art, enjoying it tenfold, when I clock 25 hours in the studio and six in the lab a week. I keep professional lab hours, living my life as a wife, daughter, friend, sister, swimmer, reader, hiker, dog-person with glee. Taking time away counts toward my productivity and power as a maker, not against it. Afterall, I get my best theories out in the field. I have every confidence you will too.