From the Adobe Website:
"The Adobe Capture CC mobile app lets you turn color themes, vector-based shapes, unique Looks, and custom brushes into a production-ready asset, all from a single photo. By combining all of the features and tools of Adobe Color CC, Shape CC, Hue CC, and Brush CC into a single app for iPhone, iPad, iPad Pro, and Android phones, you get our most powerful capture app to date."

How can I get Adobe Capture CC?
Adobe Capture CC for iOS and Android phones is available as a free download through the iTunes App Store and Google Play.

How do I create a pattern (see images below)?

A Open the Adobe Capture app. Tap Patterns.
B Tap the + icon at the bottom of the screen.
C Tap the camera icon to take a picture using the camera, OR
D choose an existing image from your
E Camera Roll,
F Gallery, or Creative Cloud.
G Use the options to refine and edit your captured pattern. Tap Next to preview your pattern.
H Tap Next again to Name and Save your pattern to a CC Library.

Is there a practical application of this Kaleidoscope for big kids?


Yes! But I freely admit to spending hours upon hours playing with patterns after I first stumbled onto Adobe Capture CC. To start I was aiming the phone camera at my monitor and grabbing color schemes from videos, such as A Dr Who or C Song of the Sea. The best part of watching the app select 5 main colors from an image was also knowing I could override each color with my own selection if I did not agree.

Then I ran around my studio creating patterns and color schemes from my "pretties" and even pulled out my phone at the dentist office because I liked the interior colors in the waiting room (above D Row 7). I had to explain to a curious onlooker why I was photographing the walls, chairs, furniture and carpet.

After a few hundred of these E (above lower left) "found" color schemes and patterns I started uploading my illustrations into the phone, and spent hours moving the triangle around to discover hundreds, if not thousands, of complementary patterns to match the illustrations.

Perhaps these could be used in conjunction with logos for motifs on postcards, spot patterns on websites, business cards, or as I am planning, character's clothing and/or wallpaper in the illustrations themselves.
Or matching t-shirts. Or totes. Or tattoos. Ok, maybe not, but you get the idea.
The possibilities are endless!

One thing I noticed immediately when capturing patterns from my illustrations, was the similarity to 19th century Eastlake design, The Arts and Crafts Movement and Aesthetic Movement, mainly because my home and head is full of it to begin with. I also collect red and white transferware china from the 1860s to the 1890s and have an affection for that time period

With that in mind, I wanted to be able to create a repeating pattern but be able to alter it with a complementary but divergent series so the designs did not feel so predictable, similar to the asymmetry of the Aesthetic Movement. And while I was not able to use the app to create the level of asymmetry I was searching for, by taking the pattern pieces into Photoshop I will be able to paste the best bits together and create repeating patterns.

Another thing I love about this app is the absolute ease at which I created a large library of patterns. I can imagine someone loading a couple of target illustrations into their phone or tablet in the morning and generating a load of patterns on their subway or ferry commute. Don't forget to disembark! I think I hypnotized myself a couple of times.

While I have not pushed these patterns to the "finished illustration" level, I have spent a bit of time working with particularly plain patterns to create more interest with contrast of shape, size, or texture by pasting several images together. It is incredibly easy to scroll through the CC libraries in Photoshop, select a couple of patterns, then using layers and masks combine to create the optimum pattern for a project.

And by far my favorite part is knowing all these designs originate from my own sketches and illustrations. It is admittedly all too easy to go online and search for quick copyright free patterns instead of coming up with my own. Back in the day we all had Dover books in our studio libraries for making a quick stat and adding to our designs. But without straining my brain to create patterns, I have generated new material that is original and matches my existing body of work because it is actually cloned from it. How cool is that?

After the "new" wore off, eventually my brain started asking how; how does the app create the pattern and how can I set up a file that will predictably create desirable patterns?

How would I lay out a series of motifs in a planned manner instead of merely loading it up, making popcorn, streaming a scifi movie and playing around until I found something useful?

First off, A I noticed the app took a square out of the middle of any image I loaded in the phone gallery, not the whole thing. So to utilize the app effectively, I needed to pre-crop the image into squares for uploading into the phone. B Rotate and C Scale the Image for more variety. D Leave the tip free for a white pattern center. E Overlapping the tip into the surrounding black leaves transparent areas.

The next step was going from just discovering the patterns within an existing color illustration, to actually creating a black and white square with the parts laid out in a manner I could have more control over.

This required checking the positions of the triangle within the app, it's minimum and maximum rotation, and understanding what area of the triangle corresponded to the created pattern.

It was not hard to figure out the base of the triangle created the outer portions and the tip created the center. So if I wanted an empty center, I needed to leave white space in the triangle tip.

So I quickly scribbled in a couple of squares with divergent motifs, mainly so I could easily see where each one ended up. The "evergreen" wreaths were a fun surprise and filled my head with holiday possibilities.

Part of my "learning process" was also taking a pattern I liked, looking back at the illustration it came from and trying to figure out exactly where the triangle had been positioned to create the pattern.

I reverse engineered it by copying and pasting the portion of the illustration inside the triangle. Eventually my pattern became all wibbly wobbly because the triangle was not perfect, but in the end I was able to create a useable pattern. So now I know, a cap sleeve and arm made an interesting shape passing under/through another.

And finally I took one of the icons to use as a guide to resketch with a digital pencil, giving it the hand-drawn look I enjoy. By sketching only a portion (indicated in yellow below) Photoshop makes flipping and rotating the cloned parts a simple process. 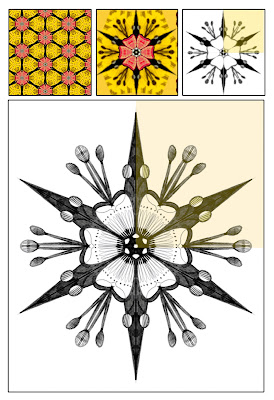 The resolution of these files is not at a level I would use straight up on a project without redrawing, but as a resource I am thrilled. If nothing else I have generated over 500 patterns in my Adobe CC library that can be used as inspiration for future projects. I have never considered myself a surface designer, but the simplicity of this app is certainly going to make the patterns I create from this point forward feel more authentic.

Posted by Kathryn Ault Noble at 7:56 AM