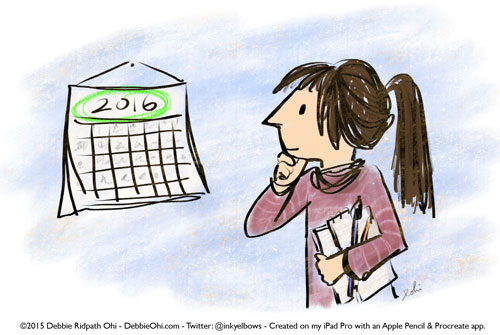 I used to make New Year's Resolutions all the time but then stopped because of the inevitable fizzling away of my initial resolve. In 2016, I'm breaking my resolution to not make resolutions and am GOING TO MAKE A RESOLUTION! I believe that the key is to be specific and realistic."I'm going to get a book contract" is not a realistic goal because so much in that process is out of your control, for example. Also, I do think that focusing on how you're going to change your current habits to achieve a longterm goal can also help.


Here are some great KidLitArtists posts about goal-setting:

Measuring Your Goals - by Maple Lam

The Difficulty Of Defining Goals - by Lisa Anchin 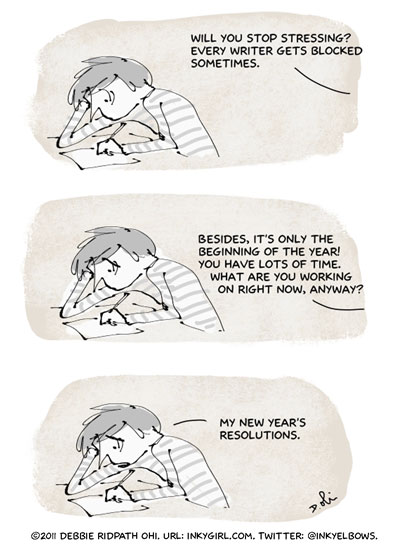 So while I do have a goal of finishing my middle grade novel and also a picture book dummy in 2016, here are my own "how I'm going to change" goals:

1. Instead of jumping on social media first thing in the morning, I am going to get in the habit of working on my middle grade novel for 15-30 minutes first. I've also been experimenting with wordcount goals, so others who are short on writing time are free to join me in my 250, 500 or 1000 words a day challenge.

2. Do at least an hour's worth of sketching from life every week, whether it's on paper or via my new (Christmas gift from my husband!) iPad Pro. 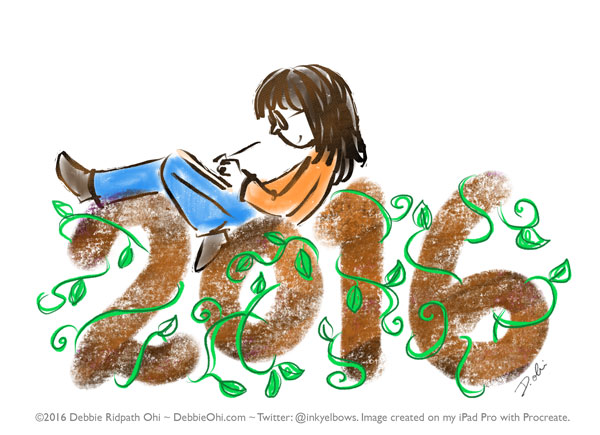 If you feel brave enough to share YOUR goals for the coming here, feel free to post in the comments below.

I asked children's book illustrators what changes they plan in their craft or business next year, and here's what some of them said:

Patricia Storms (@stormsy on Twitter) said: "I would like to explore new styles of art that are more illustrative and focus more on writing stories that have more depth, heart & empathy. I would also like to put more elements of music in my stories, too."

Stephanie Olivieri (@stepholivieri on Twitter) said: "I would like to get more educational books, or series, so I can have more steady work in children's books this year. As well, get more jobs right from publishers."

Aram Kim (@StudioAram on Twitter) said: "I've been working pretty small, comfortably fitting in no larger than 11x17 tabloid size. I started doing that after years of working pretty big. As much as it's been convenient to work small, being able to scan with no trouble, being able to print without having to reduce the size, etc., I realize it's been somewhat restricting my freedom. I feel like I think small. In 2016, I will just bite the bullet and work big and see how it suits me. Hopefully it will free my style more."

Dani Duck (@DaniDuck on Twitter) said: "I'd like to think I'll be working harder to get clients next year. It's hard to tell, because I'll have a new baby! I'd like to send out a few rounds of post cards and pump up my portfolio. It would be fun to do some portraits as well. I'd also like to increase my activity on social media in ways that will help me learn and grow my business."

An anonymous respondent said: "I need to carve out time from what seems like 24 hours a day of other stuff I have to do first, and get this career going!"

Ellie Arscott (@elliearscott on Twitter) said: "I'm planning on choosing a smaller number of art directors/editors to send a larger package of work to from my mailing list. I've been mailing single postcards to many thus far and with postcards there's no response or feedback so I feel it's time to pick some key targets and see how that goes in 2016. And of course I plan to keep making beautiful art from the heart. I've been trying some new ideas and techniques so I want to keep pushing myself and exploring."

Marsha Riti (@Marshariti on Twitter) says she will be pursuing writing and illustrating her own picture book / board book.

Kerry Dwyer (@kdwyerillo on Twitter) plans to illustrate a picture book and is going to focus on creating dummies. 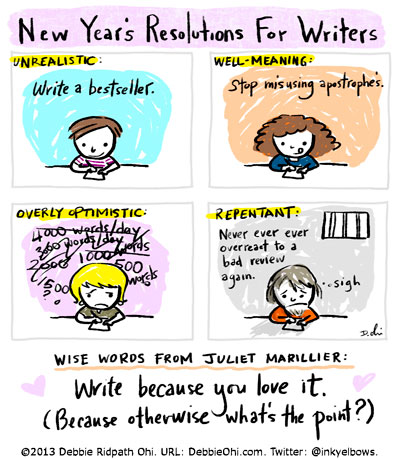 Debbie Ridpath Ohi's first solo picture book, WHERE ARE MY BOOKS? (Simon & Schuster) debuted in 2015, and her illustrations appear in books by Judy Blume, Michael Ian Black, Lauren McLaughlin and Rob Sanders. For info about her 2016 books coming out from Random House Children's and HarperCollins Children's, see DebbieOhi.com/books. Twitter: @inkyelbows.
Posted by Debbie Ridpath Ohi at 9:00 AM