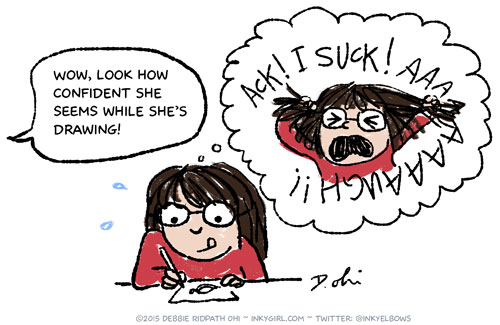 So much has happened since 2010, when I was chosen for the SCBWI Illustration Mentorship Program and offered my picture book illustration contract.

Here are ten things that I've learned since that year:

1. Getting a book contract doesn't mean the end of self-doubt. At least twice during each book project, I go through major "omigosh, I totally suck" angst.

2. The author and illustrator tend to get most of the public limelight but wow, there are so many behind-the-scenes people who help to get a picture book out into the world. Find out more about them. Be grateful.

3. Social media can be fun and rewarding, but it can also be a time vampire with energy-sapping Drama. Keep track of how much time and how you spend your time in social media, and be aware of how much emotional energy you invest. Also see #6 on this list.

4. When you're working on a picture book story, read everything out loud. You want your story to be FUN to read out loud, both for the adult and the young reader. Take the time to polish your manuscript before sending it off. As my editor Justin Chanda said, don't assume that short = easy.

5. Find a good backup system for your files, and be disciplined about doing it regularly. Save multiple versions. That way you won't freak out when you accidentally flatten and then save a Photoshop file with a zillion layers and realize you don't have a backup. Not that, um, I've ever done this. Set up an automatic backup system (I use Time Machine), a manual backup at the end of intense workdays (I use SuperDuper) and I also make version copies of illustration files.

6. Think twice before throwing rocks. Before jumping on a popular bandwagon of condemning someone in the industry because of something he or she said, think of the times when you've said something that could upset people if you were quoted out of context. Yes, there are worthy reasons for getting upset and a call for action...but before you go down that road (including retweeting/sharing someone else's inflammatory opinion), do your research and think hard about your motivation.

7. For every person who loves your book, there will be another who hates it. It's so hard not to take bad reviews personally, but try not to dwell. If you get a bad review,  commiserate in private with someone you trust but do NOT -I repeat do NOT- publicly post a response. Here's why. If you get a good review, celebrate the moment but don't let it go to your head.

8. If you're an introvert who is terrified of public speaking, don't wait until just before your book comes out to start practising. The sooner you start, the less terrified you'll be when you start being invited to do public speaking. Don't give in to the mindset "I just want to focus on getting published first, I'll worry about my fear of public speaking later, when I have to" like I did. Practice with smaller and informal groups first. Practice with kids as well as grown-ups. Practice in front of the mirror. Just practice.

9. Guard your time. Learn how to say no, even if it means disappointing people. This was the toughest for me. There are so many good causes, fun projects, small favors. Instead of saying yes to them all and then regretting it, choose just a few and embrace them.

10. Always make time to play. This can be difficult, especially when you have multiple projects on the go and upcoming deadlines, have a day job or school during the day, or other obligations that take priority. But if you don't make time to play (experiment, have fun with your art, etc.), then you and your work are going to stagnate.

I still feel like such a newbie and am learning so much about the craft and business every day. Did anything above help you? Do you have anything to add that might help others? Feel free to post below.

Debbie Ridpath Ohi has illustrated books by Michael Ian Black and Judy Blume for Simon & Schuster, and her first solo picture book, WHERE ARE MY BOOKS?, comes out from S&S in May 2015. She blogs about reading, writing and illustrating children's books at Inkygirl.com. On Twitter: @inkyelbows.
Posted by Debbie Ridpath Ohi at 7:58 AM