Karyn Raz was the recipient of the SCBWI Mentorship Award at the 2012 Summer Conference. The Kidlit Artists Blog would like to officially welcome Karyn as a contributor to the blog! Today we ask her a few questions about the Mentorship experience and about what she is up to these days. 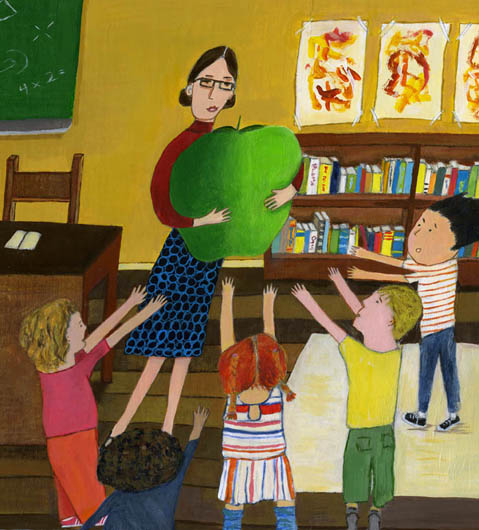 Kidlit Artists: Did the feedback you receive during the mentorship critiques either change or confirm the direction of your illustration? Are there any specific examples you can share?
Karyn: The feedback definitely confirmed what I already suspected about my portfolio: that it needs more clarity, and more sequential imagery. There are a few different sections in my book in terms of technique and subject matter, and one mentor found that abrupt.  She recommended extending each section longer. She said: “it’s like changing the channels. Let the groove go on longer rather than changing so quickly.”
The mentors wanted to know more about the characters in my images. Where did they come from, where are they going? One mentor called them a “cast of characters without a script. Give them lines, action, something to do.”
My portfolio concludes with a series of Hanukah images, which several mentors responded to.  One said my portfolio began with action, then had some reaction, and was now beginning to show some interaction. It was starting to be a picture book. 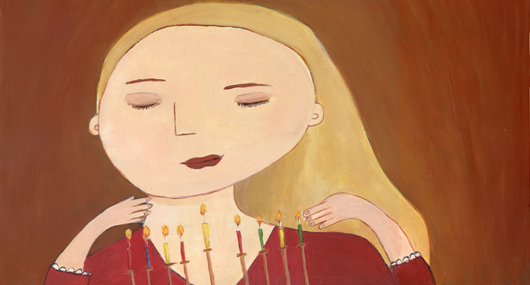 Kidlit Artists: Have you seen a shift in your work since you were mentored?
Karyn: I have been working on creating more imagery that is narrative driven and aimed specifically at the children’s book market. 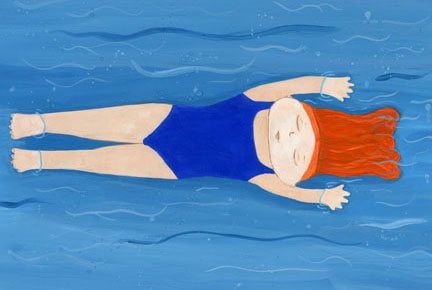 Kidlit Artists: What kinds of projects are you working on now?
Karyn: I am in the early stages of writing and making dummies for several new stories for children. I have also recently joined Ten Women (http://www.tenwomengallery.com ), a gallery in Santa Monica, and have been creating new work to sell there. 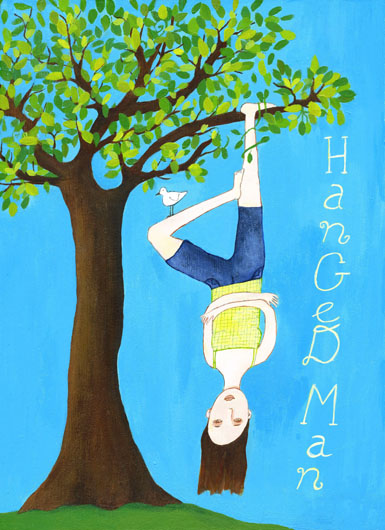 Kidlit Artists: Is there one really helpful piece of advice that you've gotten since pursuing illustration?
Karyn: It seems that most of the illustrators I’ve admired over the years have followed a similar track: they draw what they love to draw, obsessively. I don’t remember who said this to me once, but it was something like “Honor your obsessions.” I love that advice. Find the quirky, freaky things that only you seem to love, and instead of sweeping them into a dark place, just go nutso with them, draw the heck out of them. That will, I think, lead to both a more fulfilling career and life!
There’s a lot more good advice along these lines from illustrator John Hendrix here:
http://johnhendrix.blogspot.com/2013/01/how-to-find-your-voice.html 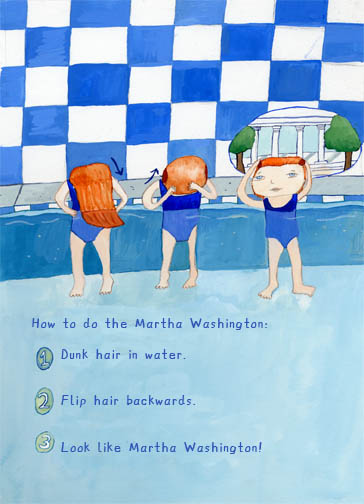 Kidlit Artists: Last, please tell us where we can find you online.
Karyn: www.karynraz.com
Kidlit Artists: Thank you, Karyn!
Posted by Unknown at 8:00 AM