Lost Weekend With David Diaz (Part 1): A Retrospective From A Veteran Mentee - by Debbie Ridpath Ohi 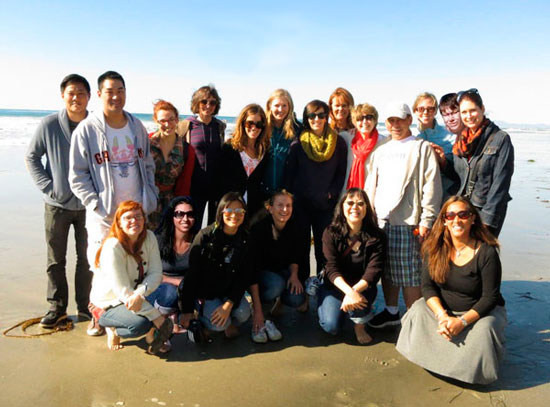 According to David, the idea for Lost Weekend began at the 2011 SCBWI convention when Eliza Wheeler, Kimberly Gee and I joked to David about wanting to snoop through his art studio. I still think it was Eliza & Kimberly's fault; I don't think I would have the nerve (and HAHA, it's my blog post, so E and K can't defend themselves). Anyway, David decided to take us seriously and suggested a Lost Weekend at his place.


Last year, David hosted the very first Lost Weekend; you can read my post about it. We attendees were relieved when David announced that he was going to have another in 2012 because it meant that he must have enjoyed himself. Or at least not scared off by all the Mentees invading his house!

Please note that this is not an officially sanctioned SCBWI event, but an invite-only gathering generously hosted by David Diaz. After posting my report last year, I had people asking how they could sign up for this year.

The best way to get invited, as far as I know: enter your portfolio in the SCBWI Summer Conference Portfolio Showcase and get picked for the Mentorship Program. Even then, however, it's up to David.

Last year, David invited the 2010 and 2011 SCBWI-LA Mentees (you can find out about the SCBWI Illustrator Mentorship Program here) as well as a couple of his own Mentees. This year, he expanded the invite list to include one of the 2009 Mentees, the new 2012 Mentees and a few others.

I have to admit I was a bit nervous. After all, the first Lost Weekend was such a magical, special event. How could a second event live up to expectations? And how would having twice as many attendees affect the intimacy of the first? And more importantly, would David still make those heavenly POPOVERS?

I needn't have worried.

Yes, this year's Lost Weekend was different from last year's. But that would be true even if exactly the same group had gotten together. Each Lost Weekend is the sum of its attendees and the moments they create together.

We all love SCBWI conventions -- it's how most of us met, through the SCBWI Illustration Mentorship Program. At Lost Weekend, however, there were many more quiet spaces and opportunities for in-depth conversation and getting to know each other.

David supervised all the cooking and did much of it himself, enlisting the rest of us to help chop, stir, clean up etc. There was plenty to eat, and it was all excellent. We had most of our meals at David's house, including breakfast:

I love David's house...it's so full of light and art and fascinating discoveries. Like this baby's head cup:

And the unique decorations on this kitchen statuary:

And of course, David's amazing paintings! I brought a copy of one of David's books for him to sign:

One of my highlights: hearing Rubin Pfeffer talk about what happened when Smoky Nights (illustrated by David, text by Eve Bunting, published by Harcourt) won the Caldecott.

I had no idea that Rubin was the Art Director for that book! Rubin is now a partner at East West Literary Agency.

Another highlight: on our long beach walk (we had to work off all those calories), it was fun to see the ebb and flow of conversation change as the small groups split off, joined other groups, split off again.

Continued in Part 2 of my Lost Weekend report....

Meanwhile, other attendees have also posted about Lost Weekend: