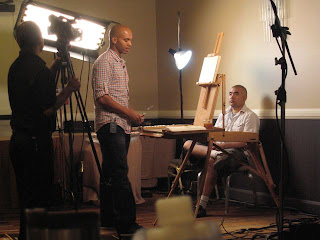 Continuing my coverage of the Illustrator Intensives at the SCBWI Summer Conference...

Kadir Nelson used oils for his demo, and asked for a volunteer to be the subject for his painting. The volunteer: illustrator Dan Santat. 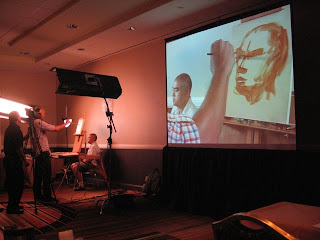 Kadir admitted to being nervous when he began. Can't blame him, what with the cameras and bright lights and the audience. Ordinarily he spends at least three hours when doing an oil portrait, and his demo was only an hour long. 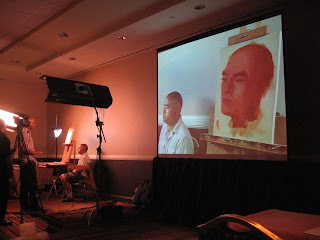 Kadir says he uses a neutral tone canvas rather than a white surface because it gives him more control over different values. He starts by blocking in shapes, then lights and darks. 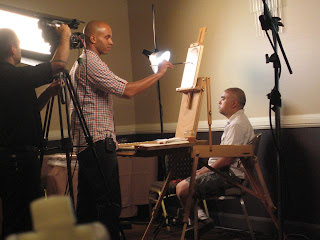 - He advises that artists make time to do their OWN art, not just art for other people. He says he learns more about himself with each painting.

- He wants to create work that will make others feel the same way as he was feeling when he was working on it.

- If you put love into your art, then love will come out of it.

- He approaches each book as if it's a silent movie, in terms of camera angles. 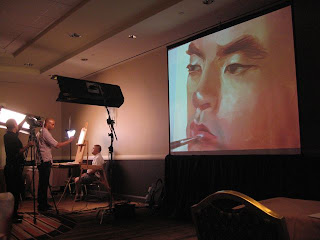 Kadir's favourite part of the painting process: adding the small details at the end, like the eye.

When asked how to choose between multiple styles, Kadir says it depends on subject and audience. 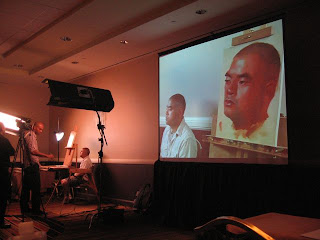 It's the first time I've ever watched someone do an oil painting from start to finish, and I was amazed.

Especially since somewhere near the end, the person in the painting changed from someone who only vaguely resembled Dan Santat to someone who looked exactly like Dan Santat!

My other Illustrator Intensive session reports
Posted by Debbie Ridpath Ohi at 12:42 PM

Email ThisBlogThis!Share to TwitterShare to FacebookShare to Pinterest
Labels: scbwi-la