Printing Variations on a Theme

Recently I purchased an inexpensive black and white printer to facilitate the process of character development. Using graphite transfer has been a mainstay for many years but I wanted to speed up the steps involved and save my hands for the actual drawing part. 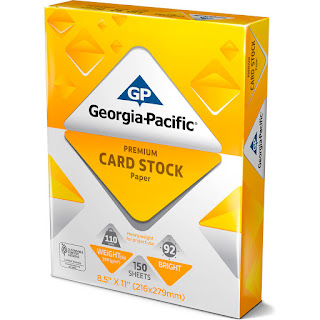 I go through reams of the Georgia-Pacific 110lb white card stock, filling a 2 inch three ring binder almost every month with sketches. I find the surface pleasing to draw on because it has a bit of tooth but is smooth enough to hold detail.

About a week ago a couple of little girls faces popped out onto my paper. Curious as to who they were, I pushed them around a bit and got the feeling they were European street kids from the earlier part of the 20th century. "Rag Girls" as well as the word "Gypsy" kept popping into my head. 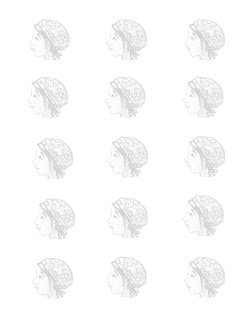 I scanned the first sketches and taking them into Photoshop, I set up a document with repeated faces. Before printing I placed a layer filled with white over the top and slid the opacity down to about 80 percent, just barely enough to the faces coming through. The image above is darker than I would print, but for the purpose of showing up here, I made it a bit darker, you get the idea.

By having the pale image on the page, I could shift the facial features slightly while retaining the overall shape. It is extremely easy at small sizes to add just a bit of a crisp edge to a nose which instantly makes the character appear older. Having the profile image faintly printed I could erase easily without removing the entire structure. I specifically chose profile for this part of the exploration because I was trying to nail down certain ages, between 8 and 12. To me the nose and forehead in profile help establish the age. 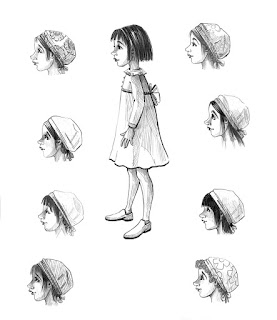 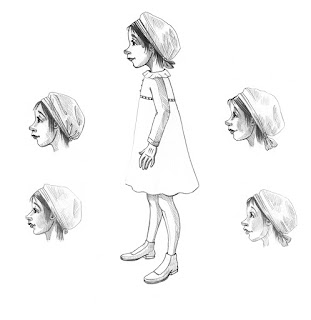 I generally create a super quick character template for each face and body type, and again using the scanner and printer I can create many variations on a theme without losing the basic shapes. 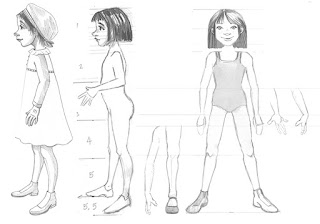 There were three distinct girls that came out to play over those few days and I wanted to know who they were, and of course to eventually draw them happier. The first two original girls seemed sad or concerned which can be seen in the lineups below. I don't know what the influence was, they just came out of my pencil that day.

Pardon the transparent dress on the girl below. After I had quickly sketched her and decided to spend more time on her, I erased out her dress and sketched in the basic body shape to see if the proportions were correct underneath. Sure enough her upper arm was too short so her elbow did not fall at the waist, which I corrected in the next group.


While I was working on them I saw an Instagram image stating it was Holocaust Memorial day, and suddenly I knew who they were. They were the lost children of World War II. In a conversation on Instagram I commented on a quote I saw in a holocaust article, they were "the children the Nazis hated. . . Jewish, Romani, and African". 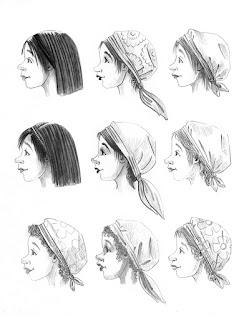 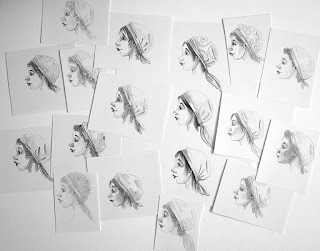 As always, I cut all of my sketches apart to view them independently and sort into like kind. Sometimes a new direction will show itself and by having them sorted I can decide if I want to follow it. I literally have piles and piles of little sketches that are generally half print and half fresh graphite experiments.


And of course there are always those crazy pages like the ones above where I go out on a limb with my playing but those go in the scrap pile if unusable or into a stack for use in perhaps another story. I had planned to sketch teenage older sisters but was probably watching a contemporary BBC drama which influenced the age and time period. So I just had a bit of fun with them. 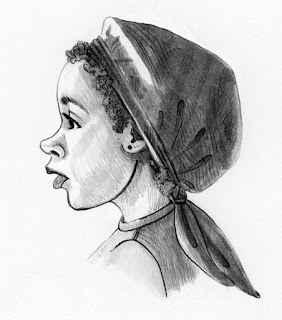 When I have devoted 12 to 14 hours a day for days of hyper focus (can't seem to stop myself until I have finished the process), I am able to sit down and sketch the character out quickly without any prints because I have memorized their facial characteristics and proportions. In fact I see their faces when I close my eyes. . . they become real to me. 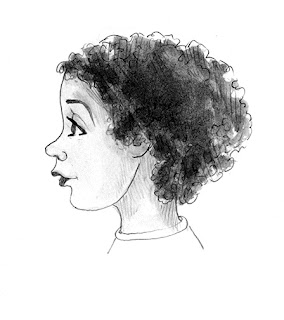 And the bonus is I have tons of sketches for my mother to choose from. The one below, or very similar to it, followed her home on Mother's Day! It is the best of both worlds, traditional and digital, and allows me to have created tangible pieces of process art instead of only tracing paper scraps or purely digital images. 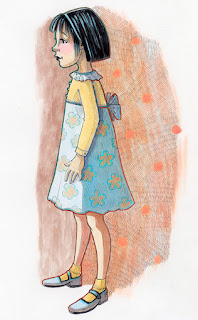 Cheap printer, card stock, and mechanical pencils for the win! 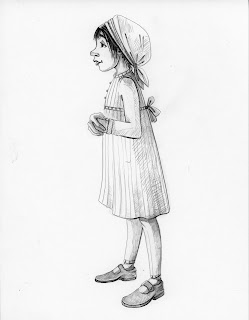