An Interview with Author/Illustrator, Tina Kügler

I've been a huge fan of Tina's work for many years and I loved learning more about her books and  her process.  I hope you will, too! 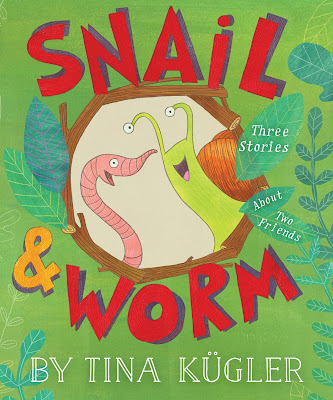 Please tell us a little about SNAIL & WORM.

One of the reviews described it as "cheerfully screwy," which is the best description I could come up with. It is three stories about two characters, Snail and Worm.

My youngest was really struggling when he was learning how to read. I was trying to find something for him that was simple enough but also funny, where there was the payoff of a gag or joke that he would get as he was slogging along through the words.  I couldn't find what I was looking for, so I wrote it!

There's a part in the last story, where Snail has a misunderstanding, and the animal that is pictured is not the one described in the words. For kids just starting to read on their own, they all get the joke, it's a reward for working their way through the story.

I chose these characters because most kids can find them outside. They have limitations, for example, snails are slow, so it helps set up the gags. Of course the snail is racing against a rock, or a stick, it's the only time he can win a race.

What was your process like for SNAIL & WORM? As an author/illustrator did
the story idea start visually or with the text?

I always think visually, the words come after. It's like, I'm a storyteller, not a writer. From working in storyboards for animation, it actually comes to me as scenes from a film before anything else. SNAIL & WORM's text came out as all dialogue. It's like a puppet show, the way it is staged, it's flat. 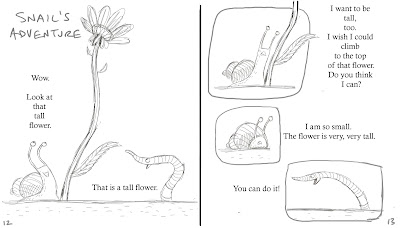 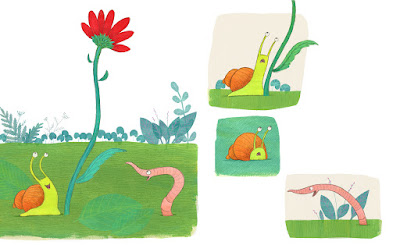 For your book, IN MARY’S GARDEN, you collaborated with your husband,
Carson Kugler. What was the collaboration process like? How did you arrive
at the finished images?

Yes, and we are still speaking. ;)

We both come from a background in animation storyboarding, so it helped us tremendously in collaborating. In animation, artists work in teams, no one person takes ownership of a cartoon-- it is passed back and forth and everyone does the thing they do best. So we treated it like that, we bounced thumbnails back & forth until we agreed. Then we did roughs, and each of us would do a pass, again & again until we agreed.

Mary Nohl used found objects, and essentially other people's garbage, in her artwork-- so I scanned found papers like old receipts, vintage postcards, old dictionary pages, and coffee-stained paper to use in our collaged illustrations.

Carson would trace our roughs onto watercolor paper and paint the main elements with watercolors. I prefer to draw and paint on my tablet, so I scanned in his paintings, and layered them with the found papers and my own digital paint.

For the final step, I drew on top of everything with a lot of hatching and shading.
We created something together that neither of us could have created individually. The difficult part was retaining Mary Nohl's personal style and design motifs as well as our own styles. 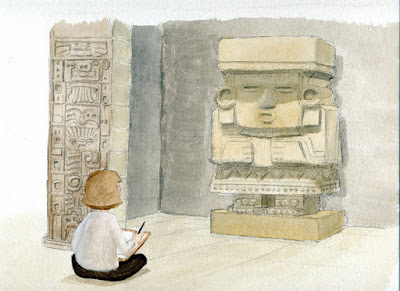 What were your favorite books as a kid?

WHAT DO PEOPLE DO ALL DAY? by Richard Scarry.
A GREAT BIG UGLY MAN CAME UP AND TIED HIS HORSE TO ME by Wallace Tripp. He is my all-time favorite illustrator, just masterful. He also did SIR TOBY JINGLE'S BEASTLY JOURNEY.

I would get lost in ANNO'S JOURNEY by Mitsumasa Anno, I spent hours staring at the spreads. It inspired the background hatching in both IN MARY'S GARDEN and SNAIL & WORM.

I also really loved the illustrations of Nancy Ekholm Burkert, she won a Caldecott Honor in 1973 for illustrating SNOW WHITE, it's still in print in paperback. I would highly recommend tracking down a copy of her version of THE NIGHTINGALE, it's out of print but tooootally worth finding. Beautiful and frightening. 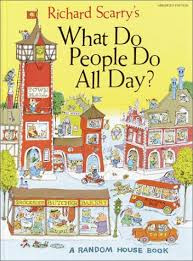 Can you tell us a little about what you’re working on now or about any
upcoming projects?

I just submitted the final art for SNAIL & WORM AGAIN. I am super excited because it is really funny, maybe even better than the first one. And a little sad. But then funny again.

Carson and I are working on another picture book biography together that we are almost ready to pitch. It is very visual so we need to have a sketch dummy together.

I am also working on an early chapter book idea I have brewing.

Where can we find you online?

My online portfolio is at tinakuglerstudio.com. I am occasionally on Twitter at @tinatheatre, more frequently when I am procrastinating.

Thank you for visiting, Tina!

You can also hear more from Tina and her husband, Carson, on their Let's Get Busy Podcast interview with Matthew Winner of All the Wonders.